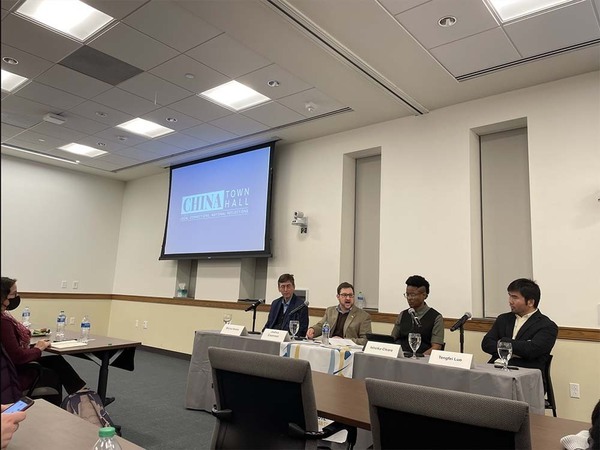 As President Biden flew back to Washington D.C. from the G20 summit, where he met with Xi Jinping, members of the Notre Dame community stepped out of the snow into Jenkins-Nanovic Hall on Wednesday night for a conversation about U.S.-China relations.

Notre Dame was one of 80 locations to partake in the CHINA Town Hall, a project of the non-profit National Committee on U.S.-China Relations hosting local conversations across the country around the American approach to China, followed by a livestreamed address to all the gatherings delivered this year by Jon Hunstman, former U.S. ambassador to Singapore, China and Russia.

“The National Committee on U.S.-China Relations is an organization that for decades has been trying to promote understanding of China in the U.S.,” Michel Hockx, director of the Liu Institute for Asia and Asian Studies, told The Observer.

Sponsored by the Liu Insitute, Notre Dame’s panel event featured Isheika Cleare, a Notre Dame political science doctoral candidate, Joshua Eisenman, a professor of politics in the Keough School and Tengfei Luo, a professor in the College of Engineering.

“The relationship between China and the U.S. is extremely worrying,” Hockx said. “One thing we can do at universities is to try and use our brains to come up with potential solutions and to be willing to have debates and dialogues.”

Eisenman delivered remarks on why rapprochement — an establishment of cordial or harmonious relations — with China is unlikely in the current moment. Tracing a history of growing extremity in the top ranks of the Chinese Communist Party over the past decade as one of the obstacles to a positive relationship. He said that the U.S. would need to wait for leaders in China who might be more open to a relationship.

“Look at the leadership right now. These are hardcore guys, man… These are not people who want rapprochement for the United States,” Eisenman told the audience. “You have to have a tango partner, you got to have someone who wants to dance. And I just don’t see anybody in the Chinese leadership who can dance, because Xi Jinping is the chairman of all things.”

Cleare spoke to the effects of the U.S.-China rivalry on the region, a focus of her ongoing dissertation research.

Cleare identified a push-and-pull between the need for security and economic development, and how the two superpowers impact those priorities. She said that American disengagement in Asia, particularly with regard to trade, has weakened our alliances.

“There’s worry about U.S. commitment. The United States tends to struggle with maintaining focus on Asia. Singapore’s former prime minister Lee Kuan Yew criticized American policymakers for treating international relations as though it was a movie, where they could press pause when they got distracted and then simply press play when they were ready to reengage,” she said.

Closing her remarks, she harkened back to Lee’s metaphor.

“So America needs to be able to show that it’s willing to fulfill its obligations and promises, that it’s able to do so, and that it intends to concentrate on Asia for the long haul, instead of coming back to press play, and hoping that the movie is just where they left it,” she said.

Luo spoke to American policies “made with the intent to enhance use the U.S.’s position to compete with China,” arguing that they did more damage than harm.

In particular, Luo made reference to the Department of Justice’s China Initiative, which sought to target espionage, particularly in academic settings, and intellectual property theft. The project was ended earlier this year, but he argued that the attempted prosecution of Chinese scientists for collaborating with colleagues in China under the initiative was damaging to the United States by scaring Chinese-American scientists and scaring away potential talent that would seek to come to the U.S.

“You don’t start a fight by stabbing yourself in the hands, no matter how strong you are. I think the policy is changing, fortunately, but the damage is done,” he said.

Luo’s comments on the China Initiative sparked debate on the panel, and throughout the room. Eisenman shoehorned in a response while answering a separate question, citing a Chinese proverb which he translated as “one piece of s*** spoils the pot of porridge.”

“We should not pretend as if the China Initiative fell out of space, guys. A lot of sneaky nasty business was going on. A lot of stuff was walking out the door. And I’m sorry, but the way you presented is like classic selection bias. Because you forgot all the cases when people really were up to nasty business and you selected only the ones where they’re doing the good,” Eisenman said.

“I think it’s important to recognize that U.S. policy is not formulated based on the desire to destroy U.S.-China relations. It’s formulated because there’s a response to a certain behavior that may go too far or may do things that are wrong, but it doesn’t come in a vacuum,” he elaborated.

In a response to a separate audience question, Luo added his defense.

“I actually want to take this opportunity to respond,” he said.

Eisenman interjected to say, “Good, that’s how we debate.”

Luo disagreed, saying, “No, this was not a debate. You said that I selected cases if you look at the stats, all of the charges are not about the technology transfer. Okay, so the China initiative is supposed to catch Chinese spies … there’s strong empirical evidence that like the rate of bad cases being bought by the FBI is very high.”

The room also argued over the merit of internment camps in Xinjiang province, where the U.N. has accused the Chinese government of human rights abuses against more than a million Uyghur Muslims. The United States has declared the situation a genocide, as have a number of other countries. An audience member originally from the province stood to argue that prior to 2008, Uyghurs “actually lived pretty good,” and that the Chinese government was compelled to establish the camps over concerns of terrorism.

Eisenman said that China values its domestic priorities over its international ones, and because the camps in Xinjiang are a domestic issue, the government would not allow the international alarm to curb its actions.

“So it was a choice between the U.S.-China relationship, and China’s Xinjiang policy, it’s gonna be prioritized, and this is what we’ve seen,” he said.

Much of the room cleared out for the hour-long Hunstman address, streamed via a YouTube live video. In his talk, the former ambassador who has served in every administration from Reagan to Trump, addressed the current situation with China, identifying ways to move forward, and levels of collaboration that are possible while challenging China’s aggression.

Hunstman also spoke to the connection and conflict between China and Russia, both countries he has served as an ambassador.

“Being large border states — Russia and China — they’re not natural friends and allies because border states typically are not. If you look at the late ‘60s, you know how close they came to nuclear war over border disputes. This is not a match made in heaven,” he said.

Hunstman added that he believes the relationship is superficial due to Putin wanting legitimacy in the eyes of Chinese.

“I’ve watched this relationship for a very long time. And I’m asked a lot about, well, ‘What about this relationship?’ And you know, ‘Is it really as deep as we’re led to believe?’ I don’t think it’s that deep,” he said. “I think it’s very superficial. I think that it’s very transactional. So what does Putin want? Putin wants to be seen in the presence of Chinese leadership. It brings in what he craves, which is legitimacy and credibility. I hate it every time I see it, because I don’t want Putin to get legitimacy and credibility.”

Hockx reflected on the evening’s town hall. He pointed out “the exchange of opinions, with our panelists coming at the question of U.S.-China relations from different angles, which is exactly we at the Liu Institute like to do.”

Originally published by the Observer: https://ndsmcobserver.com/2022/11/these-are-hardcore-guys-town-hall-debates-u-s-china-relations/?fbclid=IwAR2q1eHMB3T4IKYjpzvO1DxMRAF2-dbeuBpI5vHUc6mRFwwue9P9JDj791Y

Originally published by Sheikh, Isa at asia.nd.edu on November 18, 2022.