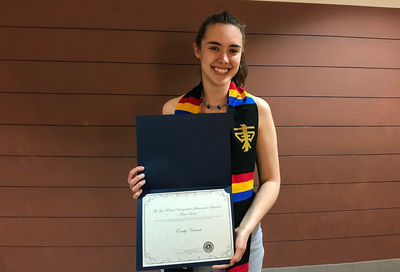 Senior Emily Vincent was named the recipient of the Liu Family Distinguished Achievement Award in Asian Studies. Michel Hockx, director of the Liu Institute for Asia and Asian Studies, presented the award at the annual East Asian Languages and Cultures recognition ceremony on May 25.

A Hesburgh-Yusko Scholar, Vincent earned a double major in anthropology and Chinese. She was inducted to the Phi Beta Kappa National Honors Society as well as the Lambda Alpha National Collegiate Honors Society for Anthropology, and was named a semi-finalist for a Fulbright grant to teach English in Taiwan. Her commitment to broadening her understanding of East Asia is demonstrated not only by courses in Chinese language, literature, and culture, but also by years of extracurricular activities.

Vincent volunteered for three summers at a private orphanage in Beijing for abandoned children with disabilities. On her first visit she worked directly with the young children and orphanage staff to learn about the cultural pressures surrounding orphans and health care. She later returned to the same orphanage to coordinate the efforts of new volunteers, as well to study more about the effects of the One-Child Policy on child abandonment. A video and article about Vincent’s work was featured on the home page of the Notre Dame website. 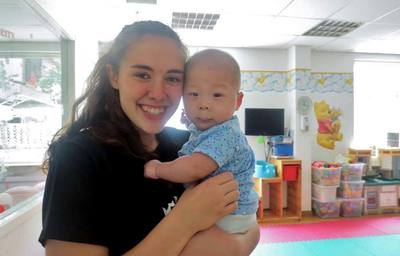 With academic advising through EALC, Vincent received the Roberts Undergraduate Research Endowment for East Asian Studies through Notre Dame’s Center for Undergraduate Scholarly Engagement to return to China a third time to conduct a nine-week independent research project on the broader question of foreign NGOs in China and how they operate given recently-passed laws. She used that research to author her senior honors thesis.

Vincent studied abroad in spring 2017 at East China Normal University in Shanghai, where she was recognized for her achievement in her Chinese language class. The following summer Vincent interned at the US Department of State’s Bureau of East Asian and Pacific Affairs’ Office of Public Diplomacy in Washington, DC, where she learned more about the United States policy positions toward China and was able to use her Mandarin skills to converse with visiting Chinese officials.

Vincent was very active within EALC. She worked with faculty to edit and provide student content for a Chinese language textbook. She regularly participated in extracurricular programs organized by the Chinese department, including performing in the Chinese mid-autumn and spring festivals, attending Chinese movie nights, and participating in Celebrate Asia. During her time studying abroad in Shanghai, Vincent challenged herself to take a class on China’s International Relations, which was taught entirely in Chinese. Outside of her studies, Vincent worked as an English tutor for the children of visiting Chinese professors.

Vincent has received a full scholarship to pursue a master’s in China studies with a concentration in law and society at the prestigious Yenching Academy of Peking University.

Originally published by Liu Institute at asia.nd.edu on May 21, 2018.