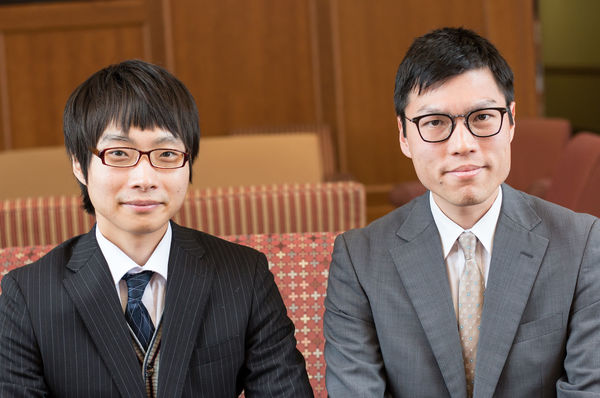 For more than 50 years, judges and prosecutors from Japan have come to law schools throughout the United States as visiting scholars to gain a better understanding of American law and the U.S. judicial system.

Notre Dame Law School has hosted a judge from the Supreme Court of Japan and a prosecutor from the Ministry of Justice since 1975. The Law School began yearly participation in the program then called, Overseas Training Program for Judges, under the direction of Rev. David T. Link, who was Notre Dame Law School’s dean from 1975 to 1999.

Ryuta Amemiya and Naoya Kihara are visiting the Law School this academic year.

The Japanese judiciary is very different from the U.S. system, as judges can be appointed right out of law school. After judges have served on the bench for a few years, they may be selected for a year of study in the United States.

The Honorable Kenneth Ripple, a judge on the U.S. Court of Appeals for the Seventh Circuit since 1985 and a Notre Dame Law School faculty member since 1976, has taught many of the visiting Japanese students and helped mentor the judges during their time at Notre Dame.

“Since Japan does not use the common law system, their judges are very interested in seeing how United States judges think and apply the law,” Ripple said. “By understanding comparative law and how we interpret the Constitution, the students are encouraged to explore their own processes and how they can apply what they learn to their cases back in Japan.”

Amemiya has been a judge for the Tokyo District Court in Tokyo for three years. He is taking courses at Notre Dame Law School on Judicial Process, Expert Witness, and Federalism.

He says the students and professors have been very kind at Notre Dame, and he has gained a lot of practical knowledge about the judicial process. He has also been able to observe several local judges during their court proceedings.

Kihara is a prosecutor at the Nagoya District Public Prosecutors Office in Aichi-Pref, Japan and is taking Legal Research and Criminal Law at Notre Dame.

He says that what he is learning at the Law School will help improve his thinking when he returns to his work in Japan. As part of his studies, he is completing a research project on forfeiture and has found the professors very willing to help him with his research and answer his questions. He will also be meeting with St Joseph County Prosecuting Attorney Kenneth Cotter as part of his program.

“These students bring an outside view. They ask good questions that we might have never asked, and this helps stimulate the thinking of our students and professors,” Ripple said. “When discussing a case, our students get to hear the way the Japanese judge would decide the case. It shows how much we have in common and this is good for our students to see.”

Originally published by Denise Wager at law.nd.edu on March 26, 2019.