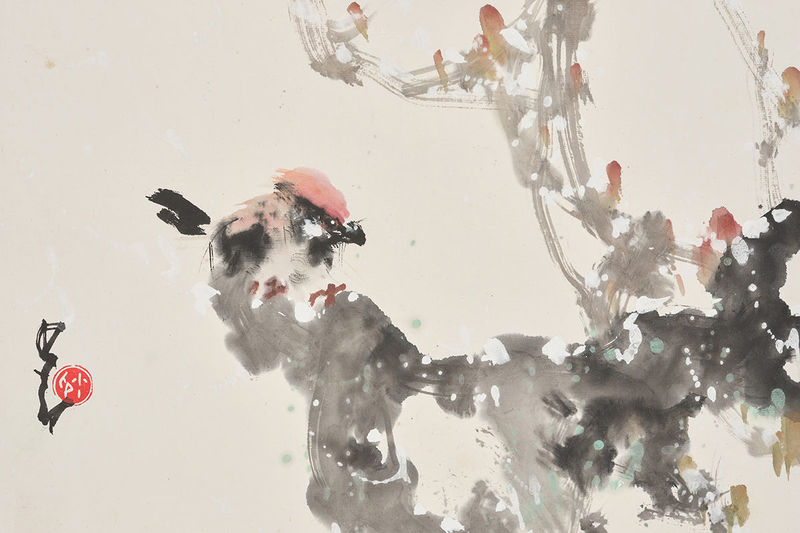 Join the Liu Institute for a lecture, an ink painting demonstration, and a reception in celebration of the exhibition Chao Shao-an: Moments between Worlds at the Snite Museum of Art.

The lecture will begin at 5:30 p.m. in the Annenberg Auditorium and will be immediately followed by the demonstration and reception in the Museum’s entrance atrium.

Guest curator and visiting professor of Asian art, Fletcher Coleman, will introduce the life and work of the Hong Kong ink painter Chao Shao-an (趙少昂, 1905-1998). As the inheritor of the innovative southern Chinese Lingnan School of ink painting, Chao had a remarkable eight-decade career as an international artist that spanned all of the major upheavals of  20th century East Asia. This talk will address the artistic principles behind the Lingnan School and the creative manner in which Chao incorporated techniques from Japan, Europe, and America into his bird-and-flower ink paintings. Special attention will be given to the artist’s extensive exhibitions in Europe and the United States during the 1950s-1960s, as well the artist’s legacy as an educator of over five decades of students. Finally, the talk will also explore the remarkable connection between Chao and the Notre Dame community, where two generations of his descendants have studied as undergraduates.

Artist Demonstration—Andy Hoi-Csiu Chan 陳海韶
Andy Hoi-Csiu Chan (b. 1944) is a third generation disciple of the Lingnan School of Chinese ink painting. Born into the southern Chinese province of Guangdong, Chan spent his formative years studying painting as a disciple of Chao Shao-an at the artist’s Hong Kong studio. Like his teacher, Chan has lived an international life as an artist. Since spending a decade in Vancouver, Chan has resided in Chicago for the past forty years. Throughout a long career, he has served a leading Chinese ink painter and instructor in North America. Working within the Lingnan tradition of innovation in the bird-and-flower painting genre, Chan has exhibited his artwork in solo and group shows across Asia and North America. His work has been collected by major museums in mainland China and Taiwan, as well as numerous prestigious university museums and institutions across the United States. Chan will take this opportunity to demonstrate some of the basic painting techniques and philosophies of the Lingnan School.