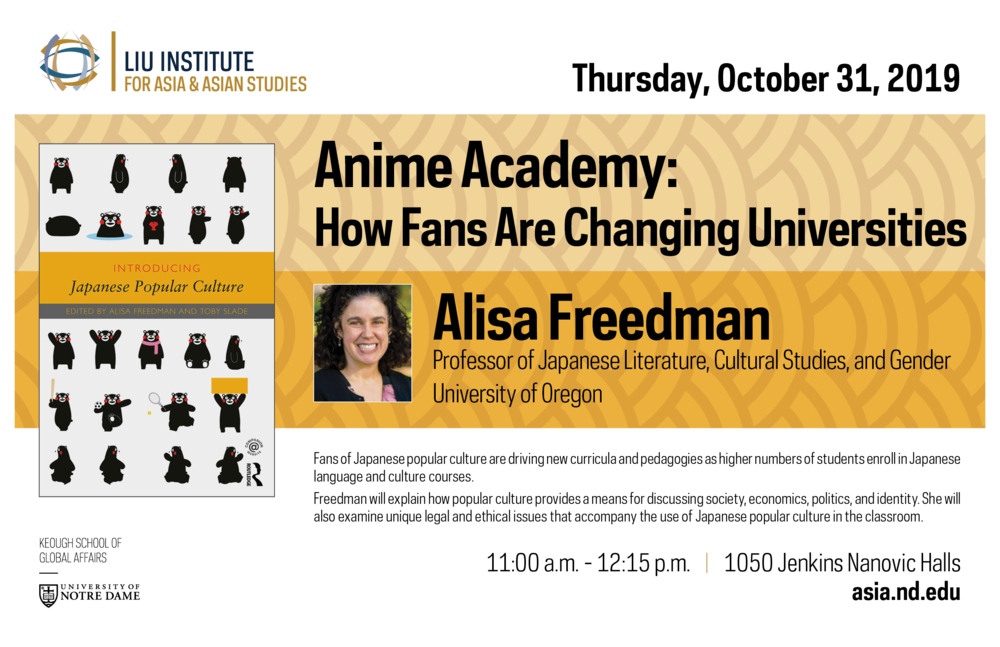 Global fans of Japanese popular culture are changing universities, giving rise to new curricula and pedagogies and raising new legal and ethical issues for educators. Popular culture is among the main reasons why generations who have come of age since the 1990s are taking Japanese language and culture courses. Students use their knowledge to pursue careers in fields as diverse as education, business, law, psychology, and art. Popular culture has shaped Japan’s international image and created an explosion of cultural influence and hybrid creativity. At the same time, it has made inevitable the use of illegal materials in the classroom.

Drawing on my experiences editing a 40-chapter textbook on Introducing Japanese Popular Culture, I will suggest strategies for applying student engagement with popular culture to help analyze how trends reveal the values of the societies that produce and consume them. An important lesson is to make students aware of how they access popular culture and are facilitating its globalization, often in unintended and legally-challenging ways. How does popular culture both provide a means for discussing topics about society, economics, politics, and identity that are otherwise difficult to approach and depoliticize problems? How to promote cultural literacy while avoiding cultural essentialism? How is Japanese popular culture both “national” and “global”? How can educators encourage the creation of new content within legal confines? Are there any negative effects of regarding Japan as the “capital of cool”?

Alisa Freedman is a Professor of Japanese Literature, Cultural Studies, and Gender at the University of Oregon, the Editor-in-Chief of the U.S.–Japan Women’s Journal, and the Chair of the Northeast Asia Council of the Association for Asian Studies (2019-2020). Her books include Tokyo in Transit: Japanese Culture on the Rails and Road, an annotated translation of Kawabata Yasunari’s The Scarlet Gang of Asakusa, and co-edited volumes on Modern Girls on the Go: Gender, Mobility, and Labor in Japan and Introducing Japanese Popular Culture. She has published widely on Japanese modernism, Tokyo studies, youth culture, gender, television, humor as social critique, teaching pedagogies, and intersections of print and digital media, along with publishing translations of Japanese literature. Alisa has been nationally recognized for excellence in mentoring. She enjoys participating in anime cons, Japan festivals, TEDx, and other entertaining academic events.