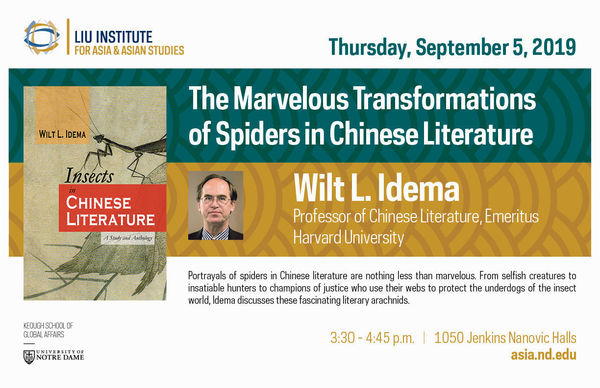 The Marvelous Transformations of Spiders in Chinese Literature

Talking animals are rarely heard in traditional Chinese literature. In high literature animals are described for their emblematic virtues and vices, but they are rarely allowed to speak in their own voice. In vernacular narrative literature animals can be quite talkative, but usually only after they have taken on a human shape. It is only in the traditional performative literature of epic ballads and prosimetric narratives that animals are given free rein to speak their own mind. When animals occur in these three kinds of literature, they usually  keep the same character, but not the spider. In high literature the spider is often depicted as an utterly selfish creature and insatiable hunter. In traditional vernacular fiction the spider is best known from the sixteenth-century novel Journey to the West, in which seven skinny-dipping female spiders seduce Pigsy, an episode that has often been adapted for the stage and the silver screen in modern times. In the traditional ballad literature as recorded in the twentieth century both male and female spiders appear as champions of justice, using their invincible webs for the protection of the underdogs in the insect world.

Wilt L. Idema obtained his BA and MA from Leiden University (The Netherlands). Following continued study and research in Japan and Hong Kong, he returned to Leiden to teach. He obtained his doctorate in 1974, and was promoted to Professor of Chinese Language and Literature in 1976. From 2000 to 2013 he taught at Harvard as Professor of Chinese literature. His research was originally focused on traditional vernacular fiction, but later shifted to early traditional drama and popular ballads and tales. He has also published on women’s literature of the premodern period. His publications of the last ten years include The Red Brush: Writing Women of Imperial China (with Beata Grant, 2004); Personal Salvation and Filial Piety: Two Precious Scroll Narratives of Guanyin and Her Acolytes (2007); Meng Jiangnü Brings Down the Great Wall: Ten Versions of a Chinese Legend (2008); Heroines of Jiangyong: Chinese Narrative Ballads in Women’s Script (2009); The White Snake and her Son (2009); Judge Bao and the Rule of Law: Eight Ballad-Stories from the Period 1250-1450 (2010); Monks, Bandits, Lovers and Immortals: Eleven Early Chinese Plays (with Stephen H. West, 2010); The Butterfly Lovers: The Legend of Liang Shanbo and Zhu Yingtai (2010); Escape from Blood Pond Hell: The Tales of Mulian and Woman Huang (with Beata Grant, 2011); Battles, Betrayals, and Brotherhood: Early Chinese Plays on the Three Kingdoms (with Stephen H. West, 2012); The Generals of the Yang Family: Four Early Plays (with Stephen H. West, 2013); and The Resurrected Skeleton: From Zhuangzi to Lu Xun (2014).