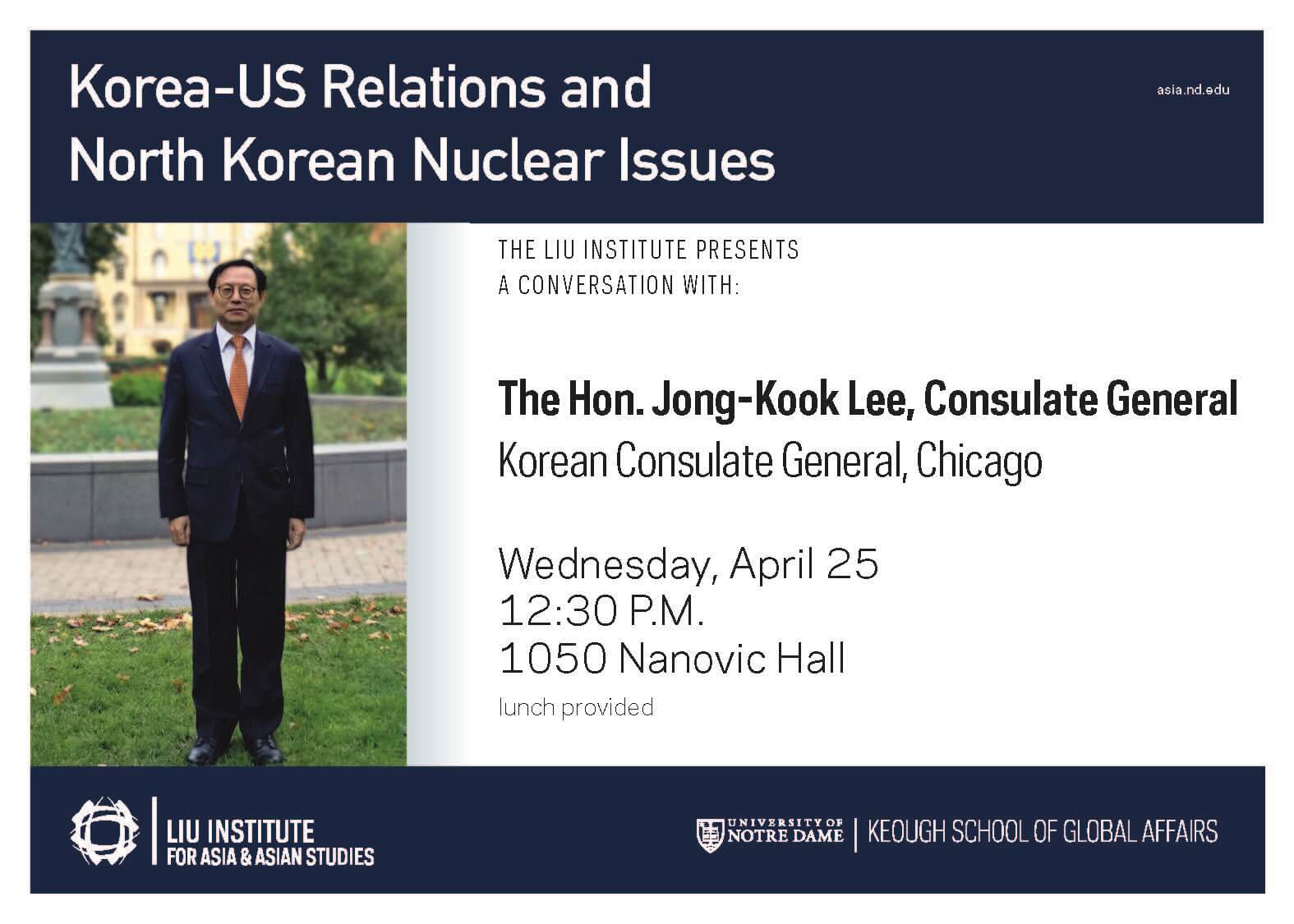 Please join us in welcoming the Honorable Jong-Kook Lee, Consulate General from the Korean Consulate General in Chicago. CG Lee will speak about Korea-US relations & North Korean nuclear issues, and engage our community in conversation.

Built on our comradeship in the wartime, mutual trust, shared values and six decades of commitment, the Korea-U.S. alliance is as robust as ever, and the ties between our two countries have never been closer. Even six decades after the Korean War, the gravity of the Korea-US alliance keeps growing as the anchor of peace and security on the Korean peninsula.

On April 27, 2018 President Moon Jae-in and North Korean leader Kim Jong Un are scheduled to hold the first summit in a decade, and the U.S.-North Korea Summit is planned in for the following month. The world is watching what these summit meetings will achieve and the ensuing consequences. Considering the failure of diplomacy in deterring North Korean ambition to become a nuclear power over last 25 years and the changing geopolitics in the Asia-Pacific region, the two summits are expected to provide critical momentum in resolving North Korean nuclear issues and the changing U.S. role and influence on the Korean peninsula and beyond.
Consul General Jong-kook Lee arrived in Chicago in April 2016. Prior to this appointment, he served as Ambassador for International Cooperation of Korean Institute for National Unification for three years.
From 2012 to 2015, he served as Ambassador Extraordinary and Plenipotentiary to Libya. Consul General Lee has additionally served as Minister of Korean Embassy in the Republic of Singapore and the Russian Federation.

Consul General Lee joined the Ministry of Foreign Affairs in 1981 and his overseas missions include posts such as New Zealand (1989-92), Egypt (1992-96), and the United Kingdom (1996-2000). Consul General Lee graduated from Seoul National University, Seoul, Korea with B.A. in International Relations in 1982 and received his M.A. in International Relations from University of Texas in 1988.

This event is free and open to the public.

Lunch will be provided first-come first-served.